MMMM…garlicky, buttery, divine shrimp. Seriously it doesn’t get much better than this. I could have woofed down that entire platter of shrimp in one sitting. If only you could do a scratch and sniff with these blog things. Okay, that may be slightly strange but the smell of shrimp simmering in a garlic butter sauce is out of this world! And lets talk about a quick meal. Other than the time to shell and devein the shrimp, it literally cooks in minutes.

How long you ask to shell and devein a shrimp? Well that task was once again pushed to my lucky husband. I figured he did such a good job chopping a chicken that he might as well gain some practice in the seafood world as well. He is handy isn’t he? The funny thing, seafood is not his thing. He’ll eat it, but I don’t think he would ever order it at a restaurant, meaning he is more of a land animal guy. But I like to keep him well rounded and spice things up a bit.

I’m impressed he actually ate it, after having the conversation on whether or not we needed to devein it and then actually doing that to each little shrimp, I think he still pulled through and thoroughly enjoyed it. Don’t worry, I won’t fill you in on the “vein” and will allow you to enjoy the shrimp without having to know it’s anatomy. Those conversations will stay in our kitchen, lucky for you. But there are some easier ways to de-frost (assuming all shrimp in-land is frozen), revive, peel and devein the little things before you cook and serve them.

Here are our tricks, but I’m not going to lie, we are NOT professionals in the seafood world. Like way amateur, fly by the seat of our pants kind of people. So take it or leave it, this is what seemed to work best for us after much trial and error. We’re open to suggestions.

First to thaw, remove shrimp from bag and place in cool water. You can do this the night before and leave it in a bowl of water in the refrigerator. Next revive them in a bath of salt water.  Then, get busy peeling and cutting. If you cut the tail off and pull, usually the shell will follow. Once they are peeled you can begin deveining. The fastest method we found was using a toothpick and inserting that at the start of the vein. Continue to weave the toothpick just under the skin of the shrimp following the vein. Pull up as you remove the vein. Ta Dah! A deveined beauty. Once they are peeled and deveined, rinse and place back in cool water until ready to cook.

Phew…did you make it? I know a lot of steps but it is one of those things, the more you do it, the better you get at it and the faster it goes. You could make it into a competition like I wanted to, because clearly I was deveining them much faster than he was. He obviously knew it because he had some excuse like the quality of the devein was much more important the the time it took. Bolonga! (Don’t ever eat that stuff by the way)!  He just didn’t want to get beat by his wife. I soon got over it as I added the butter to the warmed skillet and then began adding the spices to the melted butter and smelled the most amazing smell in the food world. Mouth watering delicious and so easy! 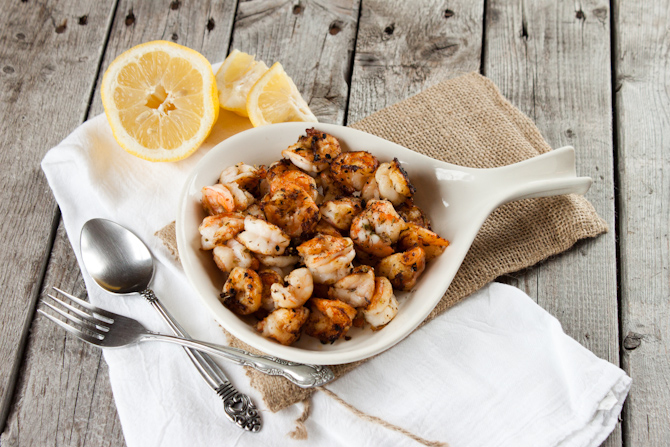