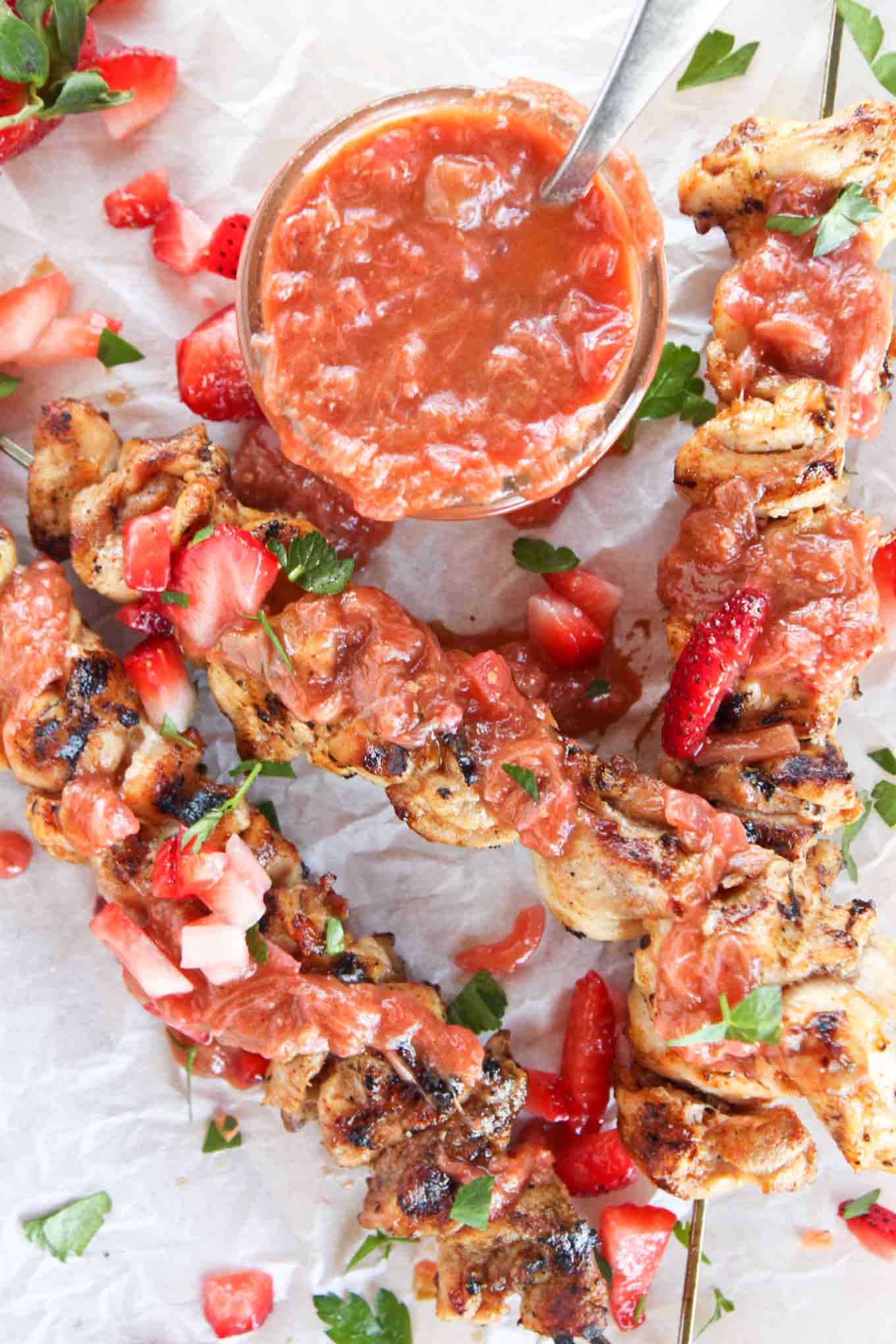 It’s Tuesday. Are you loving summer yet?

As it feels like we are getting pulled in a million different directions, having something quick and easy to throw on the grill is a n-e-c-e-s-i-t-y. Being able to throw the entire meal on the grill, well that’s a whole new level. We didn’t make it that far ->LET DOWN<- but at least we have the grill and some skewered meat.

Have I told you my love for skewered meat? I think it is because my favorite piece is always the outer edges with the slight crisp to them. Each piece perfectly cooked and need I say it, coated in sauce. Bite sized saucy pieces of meat is how I grill. Now I know, it’s no ribeye or whatever have you but convenience wise, skewered meat cooks in a fraction of the time and need I remind you that each piece can be coated in sauce?

My love for sauce never ends.

Speaking of sauce, this one is more of a chutney. Okay it is a chutney and one that hits the verge of spring and summer perfectly. Here you have strawberry rhubarb chutney that smothers the perfectly grilled and lightly seasoned chicken pieces.

Are you skeptical of it?

Are you one of those who feels that strawberries and rhubarb should be reserved for the after dinner meal? 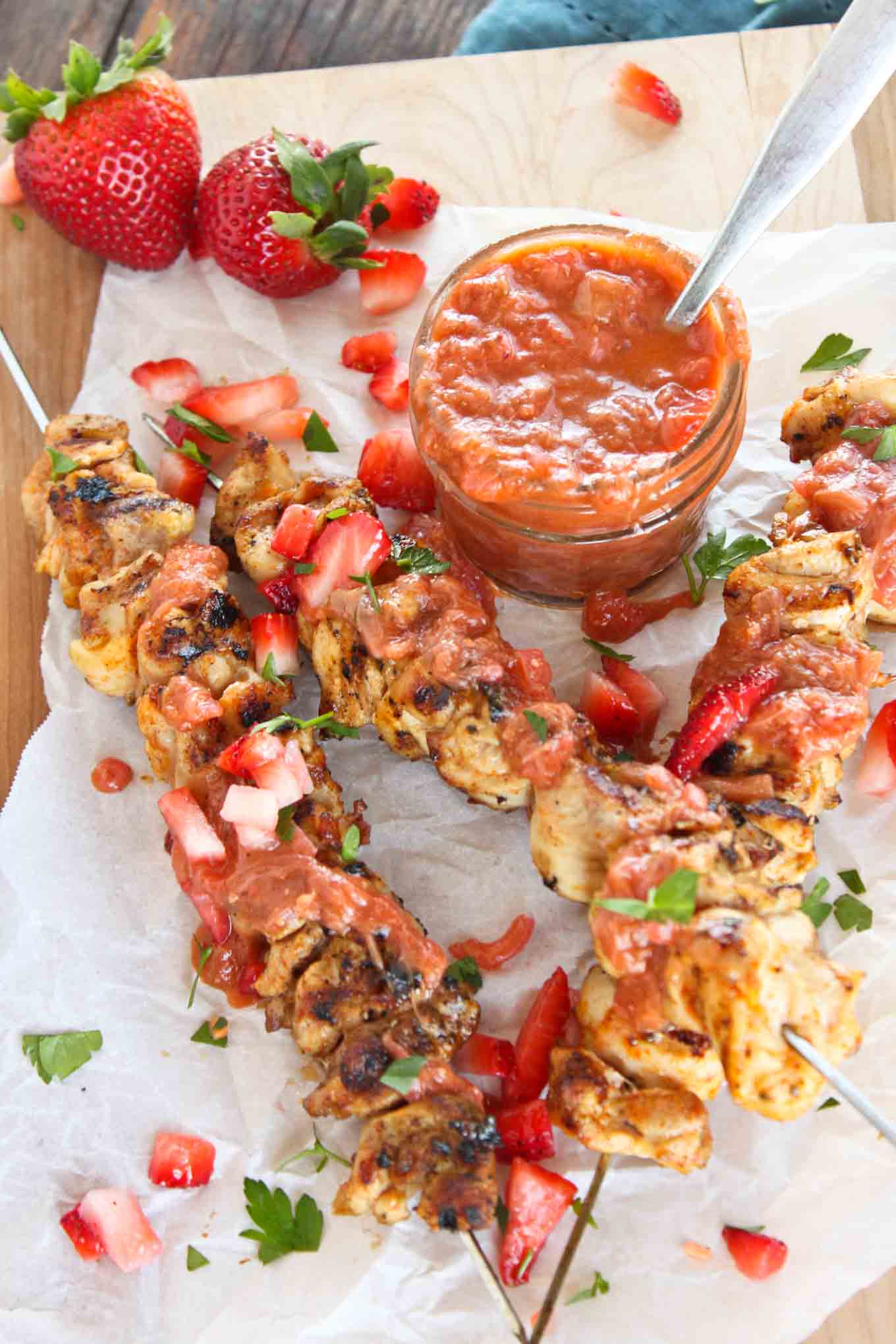 Don’t worry the hubs was very skeptical as well. I know this because he always goes silent when he asks, “what’s for dinner” and I tell him something he isn’t quite sure about.

Never a complaint, just silence. And then after the meal it is either a never again or in this case, “Wow! That was better than I anticipated.” In this case, the chutney was the star. If you’re not familiar with chutney, here is your first and great chance to get acquainted.  It combines the savory of the onion and mustard with the sweetness of the strawberries and not to forget that hint of tartness from the rhubarb. It really is pretty remarkable how the combination of such foods can turn into something so delicious.  If you haven’t turned fruit into a savory dish, YOU MUST try it out.

Now if you want to just get the recipes you are free and welcome to pass on another puppy preschool story and just head to the bottom of the post.

If you want more drama than just keep reading. Because the stories. never. end….

First of all, we survived, which is a success in itself. This time the hubs and I were a little smarter in deciding it would be best if I just went with our oldest. Of course, running 10 minutes late as usual (which on a side note, I wouldn’t call us “late people” just to puppy preschool apparently), treats in hand, we bust through the door to once again interrupt all of the other dogs in the class. Surprise, surprise.

This time it was apparently a class full of barkers and so we created this obnoxious harmony of dog barking while our little precious Boomer is calming walking in, with a loose leash ready to listen to any command I give him. Okay that was a lie. It was again, more like me being drug into the class by a dog pulling so hard on his leash he is choking himself and panting like he is near death all the while I am trying to hold the treats, which has greatly diminished from the time we left home as well as speed up our daughter who is taking her sweet ol’ time.

We finally get situated in class and as we begin working with Boomer I wonder where all of the treats had gone. Once a full bag (when we left home) now only had a couple in it. I ask Ava what had happened and she said that they were practicing tricks in the car. Perfect. I now have a full dog, bloated on soft, chewy treats and just a few left to get me through an entire hour of class.

This is the perfect storm.

The reality with Boomer is that he is smart. He is so smart, he plays dumb. 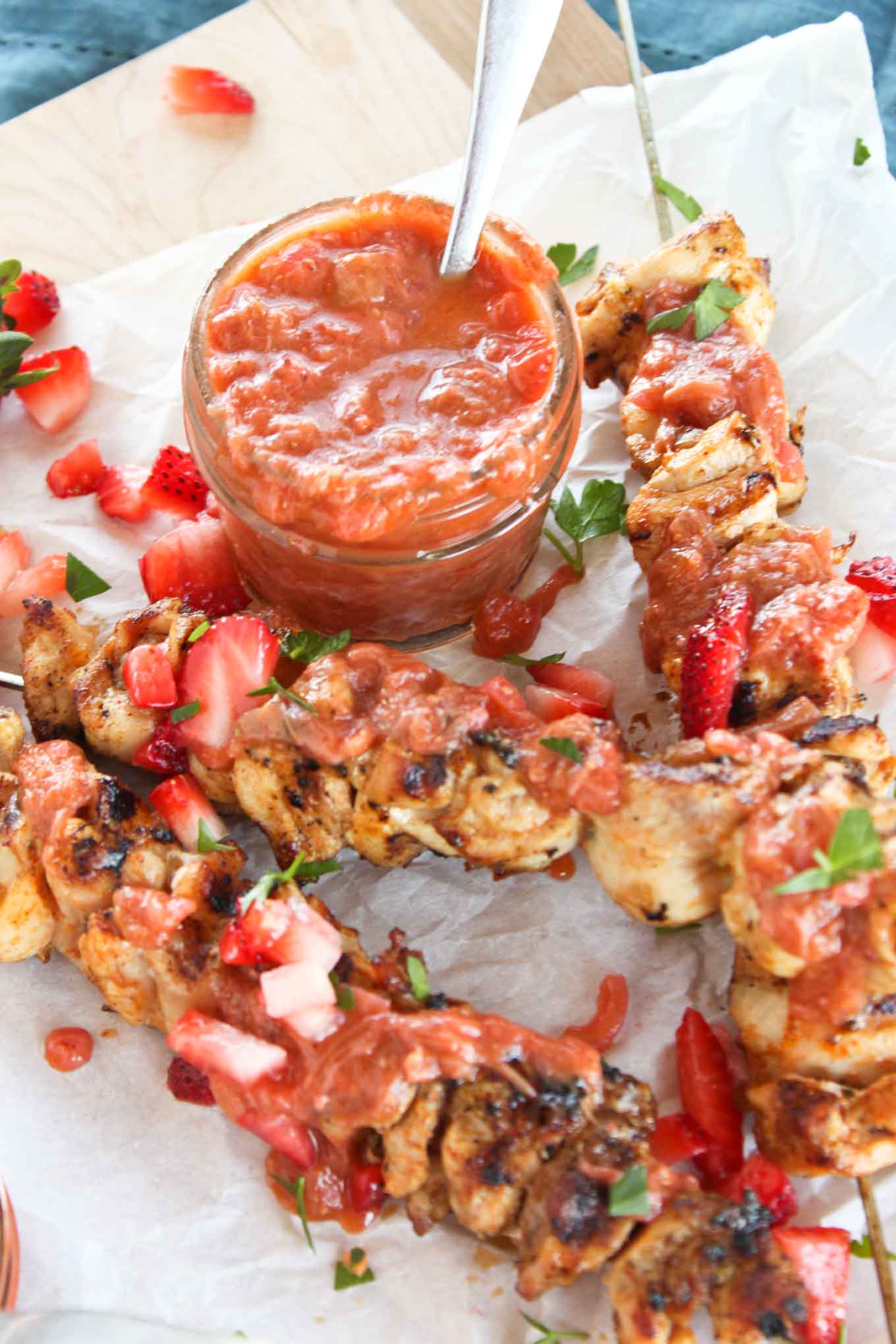 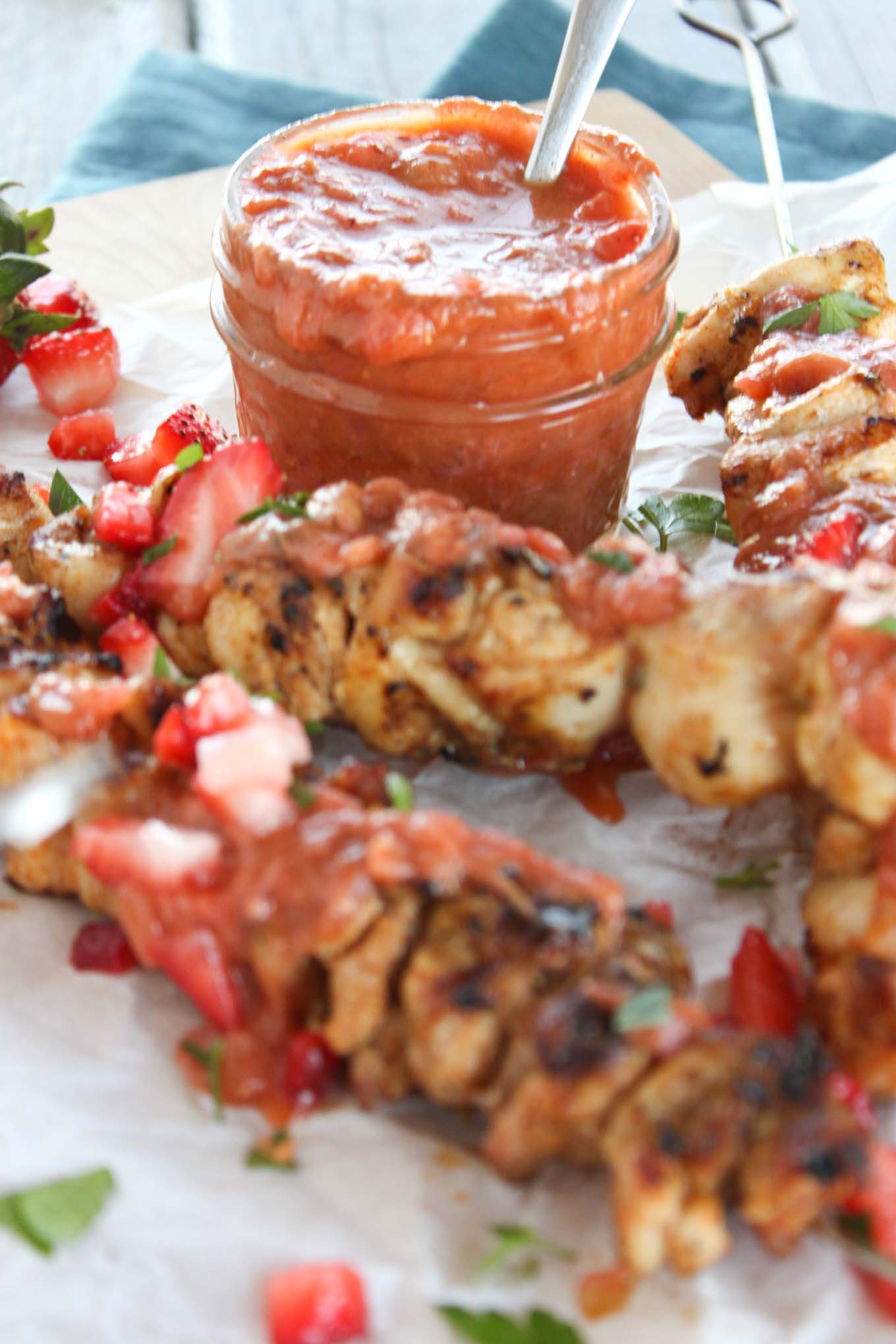 He is near genius when food is around. He listens (mostly) and obeys the commands. You take away the food and it’s like we’ve never even attempted any training at all. He acts like he has no idea what it means to sit let alone stay or leave it.

Of course he impressed the trainer with his ability to listen when food was present. I told him this is his life. At home as the girls are trying to “train” him, he has learned that if he sits and doesn’t move they will just keep giving him treats. There is no need to even move in between treats. Nope, as they are running all around him, towards him and away from him he just sits and waits and waits some more and eventually is given more treats than I can even tell you.

I’m pretty certain I’ve seen him sit in nearly the exact same spot for a good 10 minutes while the girls made him practice his ‘tricks.’ Or should I say trick because really all he is doing is sitting, regardless of if they are thinking he is staying or leaving it, he is really just sitting. Take away the food and he can’t sit still. ->SIGH<- Story of my life.

Work for nothing, well why would he ever do that when treats just seem to fall into his mouth when the kids are around. Tough life, eh?

So halfway into the hour, guess what, we run out of treats. Which becomes a nearly impossible battle to get him to do anything, let along focus on anything but the barking little dog beside him who he thinks is a toy (no offense if you have a little dog, I was just worried for the safety of that miniature little thing). The once perfect little dog is now pulling on that leash, gagging himself, hacking all while I’m suppose to be positive. Positivity is apparently something I need to work on. 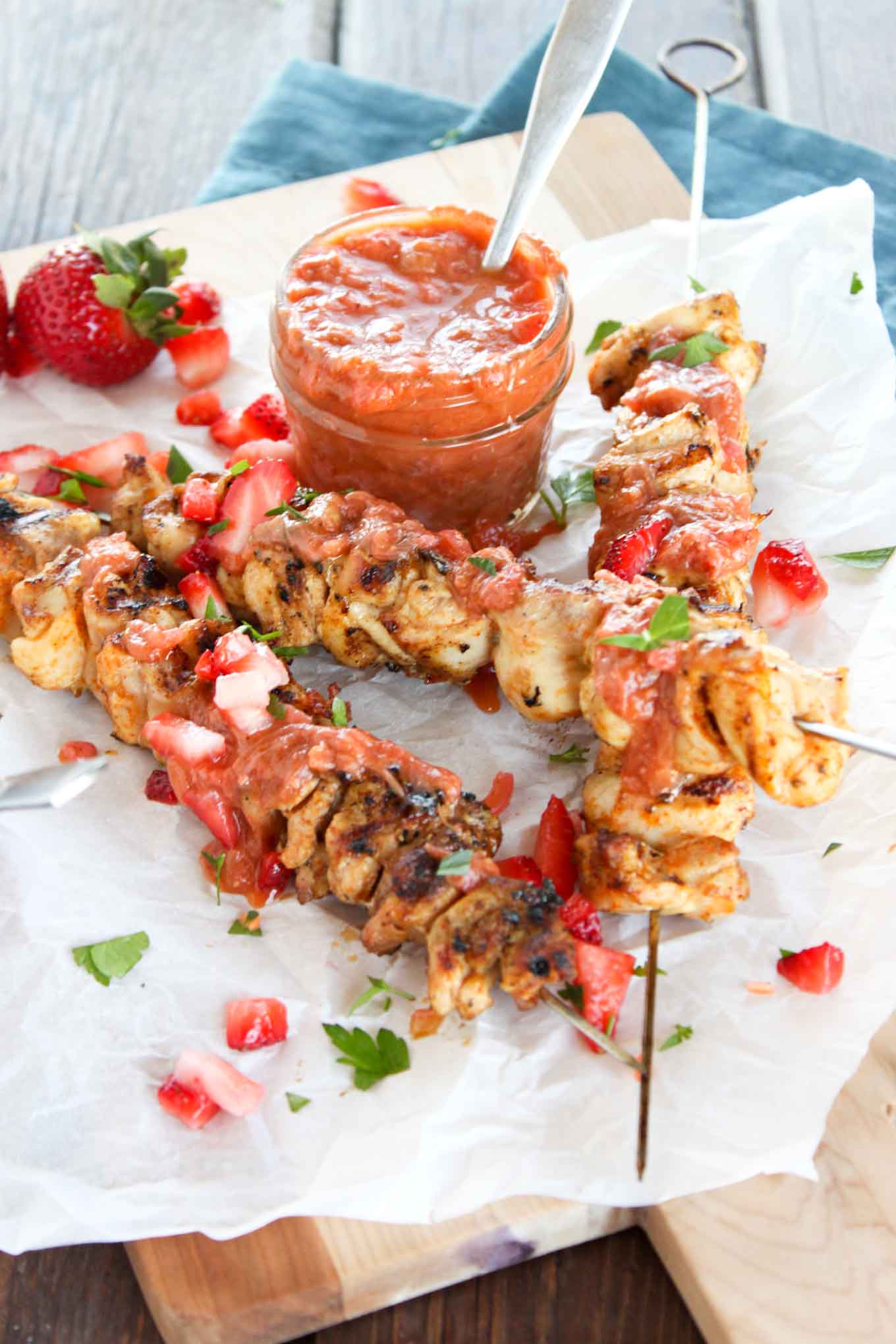 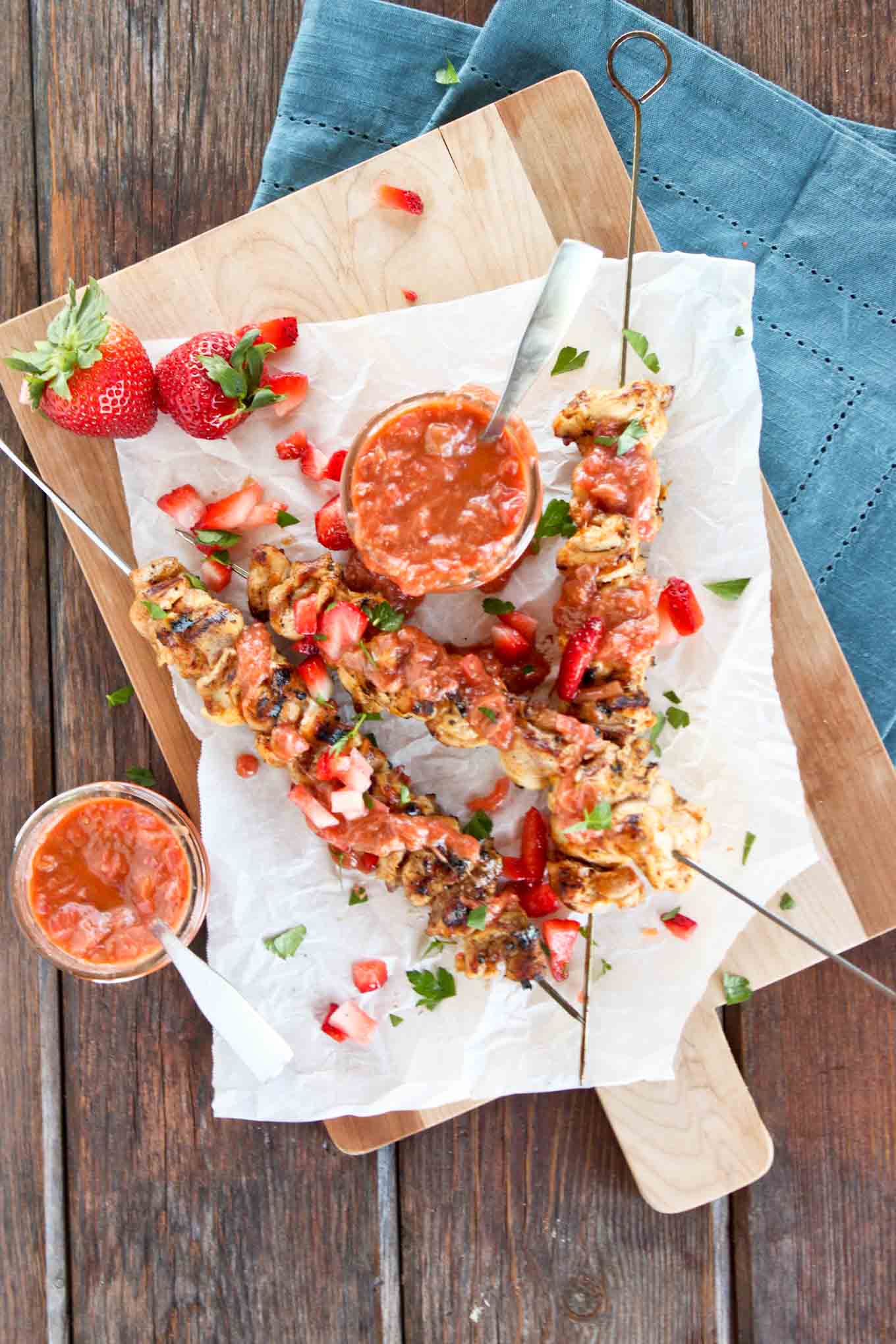 I was counting down the time until play-time, my oldest was now in need of going to the bathroom and I was still being thrown around by this half-grown beast. I understand now why my husband thought it would be best if he stayed home. This stuff (our life) is kind of overwhelming to him at some points. I don’t blame him.

At least he is a good sport.

So we go to the bathroom, dog and all because what they heck else was I suppose to do with him. As we are finishing washing hands, he proceeds to drink out of the toilet, I shake my head in disgust and want to know when this animal is going to learn some manners.

Finally, puppy play-time. Leashes off, stand to the side and watch as energy is burned. Inside, outside, inside and back outside. Pretty soon we see the trainer walking Boomer back inside to go sit in the corner. I just watch as they work with him, making him relax and sit. I look at our oldest as she looks at me with a huge smile. Mom, they just put him in time-out.

What?!? They put the dog in time out. I mean, I’m sure he totally deserved it but doggy-time out. It happened not once, but twice. No other dogs but ours had to sit in time-out.

I asked afterwards what his behavior was for sitting in time-out. They blamed it on the exhaustion of the other dogs and Boomer just wasn’t letting them get a break. No mercy I guess gets you in time-out. Just another proud parent moment and you can be sure the hubs was pretty proud when I told him that moment. Time out, not just once but twice can only be done from our family.

This is life, right?! I would like to never have to post another story about puppy preschool but it seems to be our M.O. where ever we go. Stories never cease, life keeps happening and it is a whirlwind of one.

That is why the grill is a life-saver. Because it produces quick and convenient meals that taste good without a lot of work or clean-up. The savory and slightly sweet strawberry rhubarb chutney is the star of the show. So light up your grill and fire this up tonight!

Now I’m off to work with our dog…