I never realized how fast time went until I had kids of my own. I mean you always heard parents talking about it but it didn’t really mean much, that is until I woke up one day and realized that my first born just completed her first year of preschool. Time does fly even in the midst of chaos. Sometimes we just need to sit back and soak it all in.

From singing her ABC’s, to new friendships, writing her name and counting. It was a very successful year! She had two fantastic teachers that helped my shy little one become confident, out-going and now so very social. There was the occasional “talk” we had to have about not saying bad things like hate and talk of witches. But that is what growing up is all about, letting them be kids and being here to help them learn right from wrong.

She was pretty proud of all she had accomplished through this year. Our refrigerator is now home to her many colorful works of art. She even had a melt-down when it was all over. Okay, more than just one. The girl loves school and I am very thankful for that. Hopefully the trend continues. I think someday there will be shouts of joy when it is summer break not tears, but we worked through it. 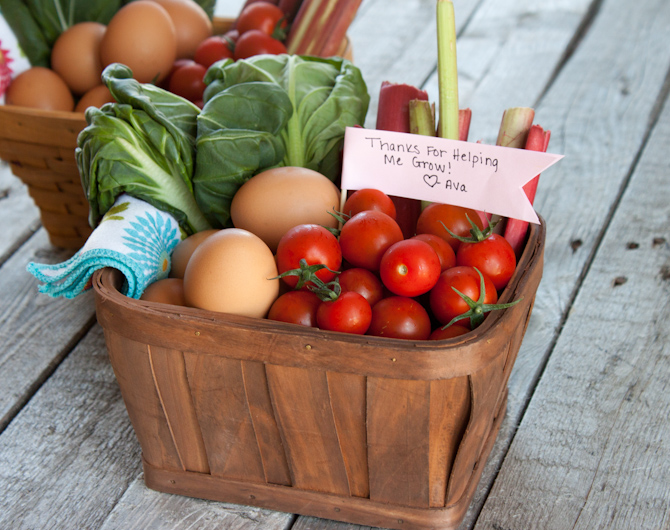 With all of that we wanted to do something special for her teachers with it being the end of the year. My initial plan was to give them some potted plants. That quickly went downhill as I saw multiple kids taking them hanging baskets and other plants. So we thought outside the box and my food nerdiness came out. I wanted something cute, yet practical and thoughtful. Produce gift baskets were the new talk through our house and my oldest was all about it.

I asked my sister (as she is a teacher as well) what she thought about receiving a produce basket for a gift. Her response after laughing, “From you….would they expect anything different?” Apparently I am a food nerd and even with her laughter I decided it was a go. So we picked up some baskets and headed to our local community gardens, the Old School Produce Company, to pick up some freshly grown goods. We got leafy greens, rhubarb and cherry tomatoes. We later added some farm fresh eggs and a kitchen towel to complete the baskets.

I must say we were pretty proud. They turned out cute and yet practical and delicious. I think her teachers appreciated it as well. Plus, the look on my oldest’s face as she carried the overflowing baskets to her teachers was priceless. It meant a lot to her. You did great baby girl, we are proud of you and can’t wait to see what you accomplish next year in preschool!

So the next time you are looking for a creative and practical gift idea, think no further than a fresh produce gift basket. 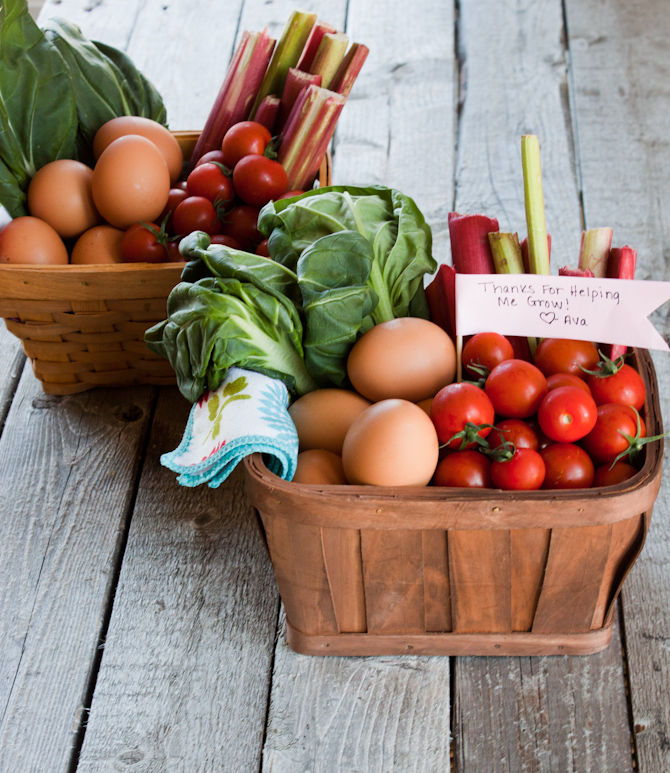