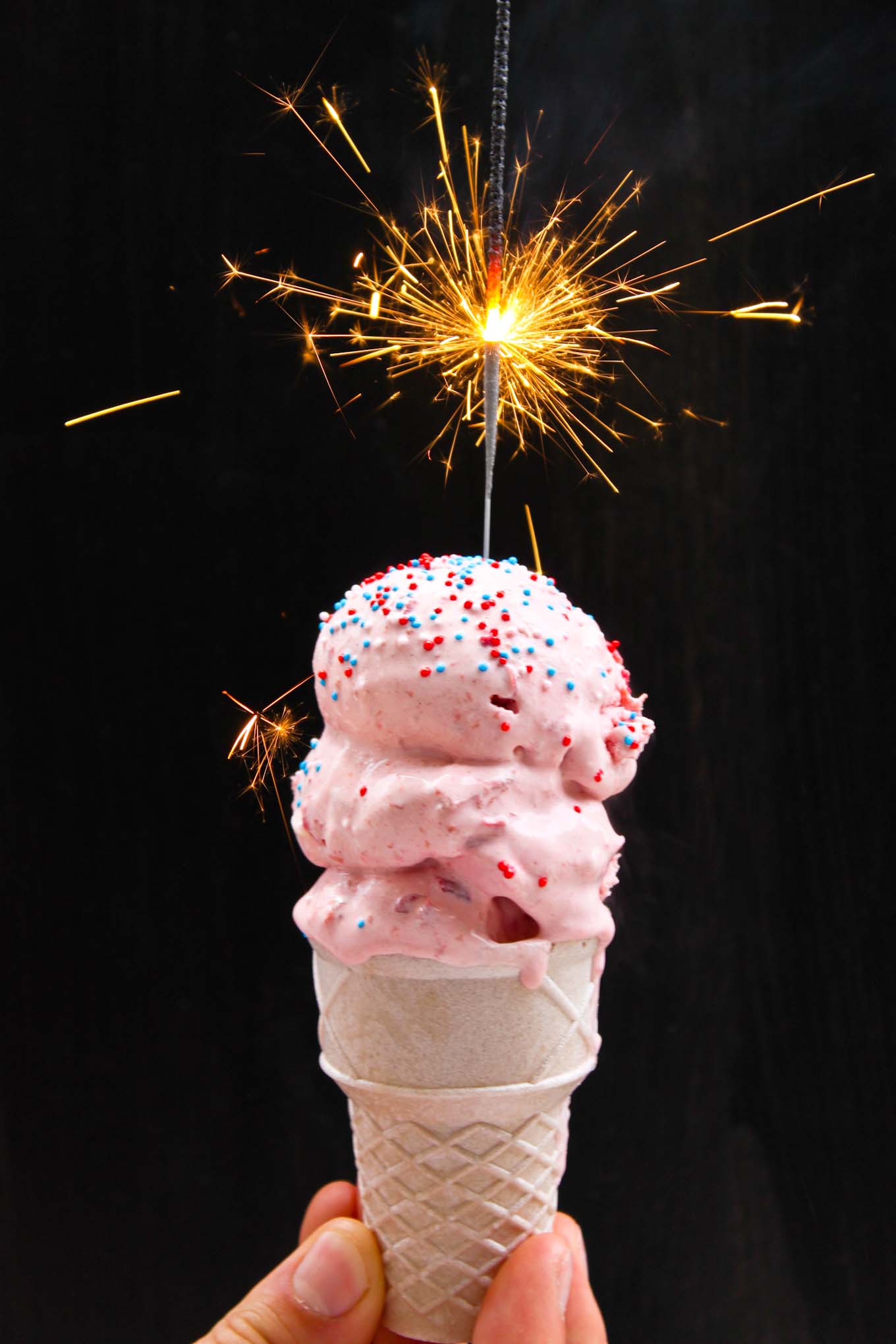 They’re pretty much two in the same.

Being that we have a lot of ice cream lovers in the house, thanks all to the hubs the homemade ice cream maker has made quite a few appearances this summer. No one is complaining though,  imagine that. Combine that with our over abundance of tart cherries that are in full bloom and we have the perfect combination of melty, chunky, sweet, deliciousness that can be scooped into the perfect triple dipper ice cream cone. 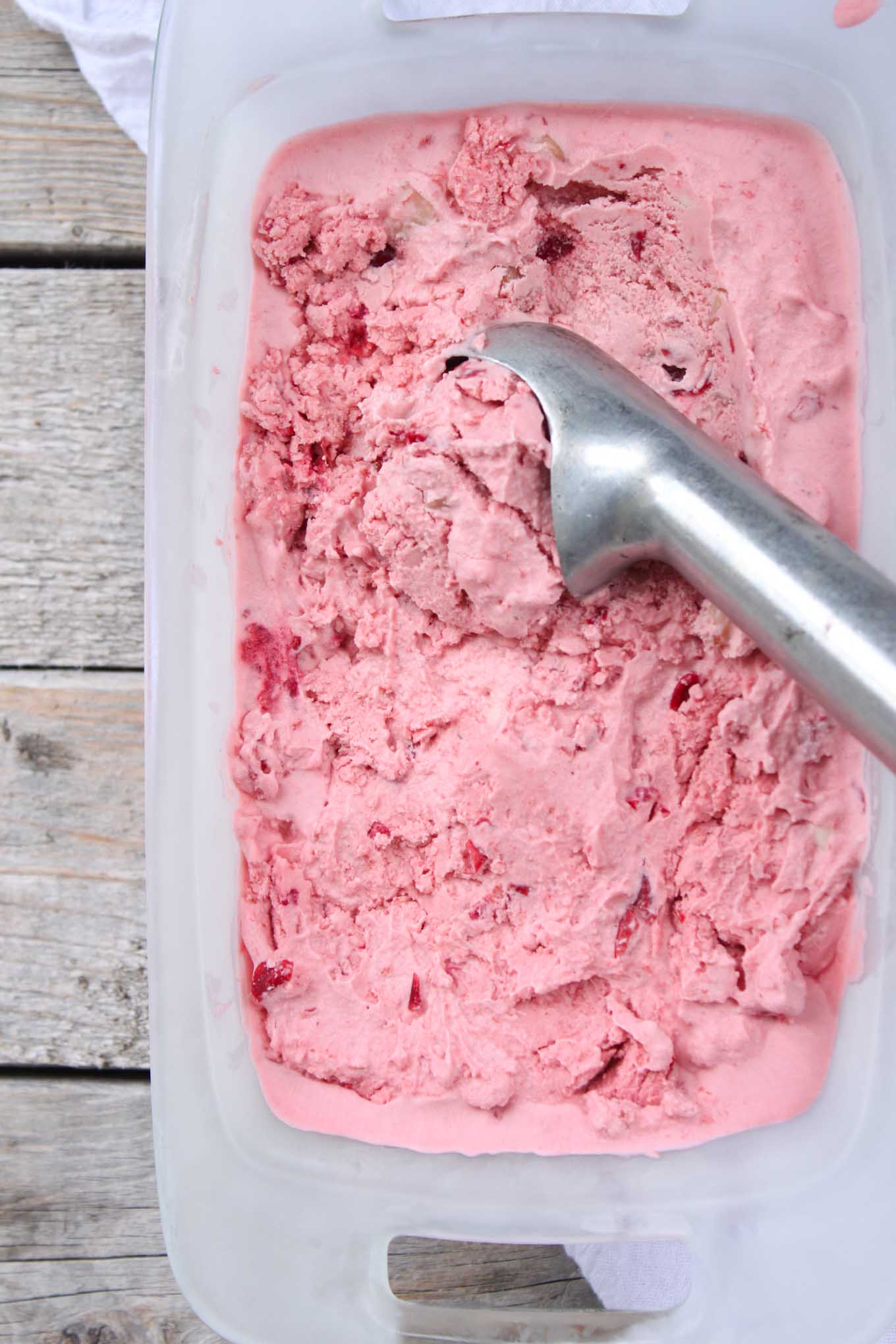 All in celebration of whatever you want to celebrate. I mean I’m doing this thinking that it would be the perfect fourth of July treat.

Or you could do it to celebrate the completion of our oldest’s very first round of an ‘organized’ sport.

One of those parents. Actually yes and no.

You see here’s the story and you’re going to want to follow along so you can better understand why my husband is losing his hair.

He was a four sporter. You know the jock in school who was good at everything athletic, naturally was very muscular, didn’t have to work very hard, it just came to him. I know, one of those guys…  (we all have our opinions it’s okay… no offense taken ->says the wife<-).

I on the other hand was terrible at anything that contained a ball. I was a decent runner but that pretty much sums up my athletic ability to a few sports. In fact, I dread anything that contains a ball. Yep, I’m the ducker. You know the girl who runs away from a flying ball instead of towards it (which I have perfect reason to but that is a different story). 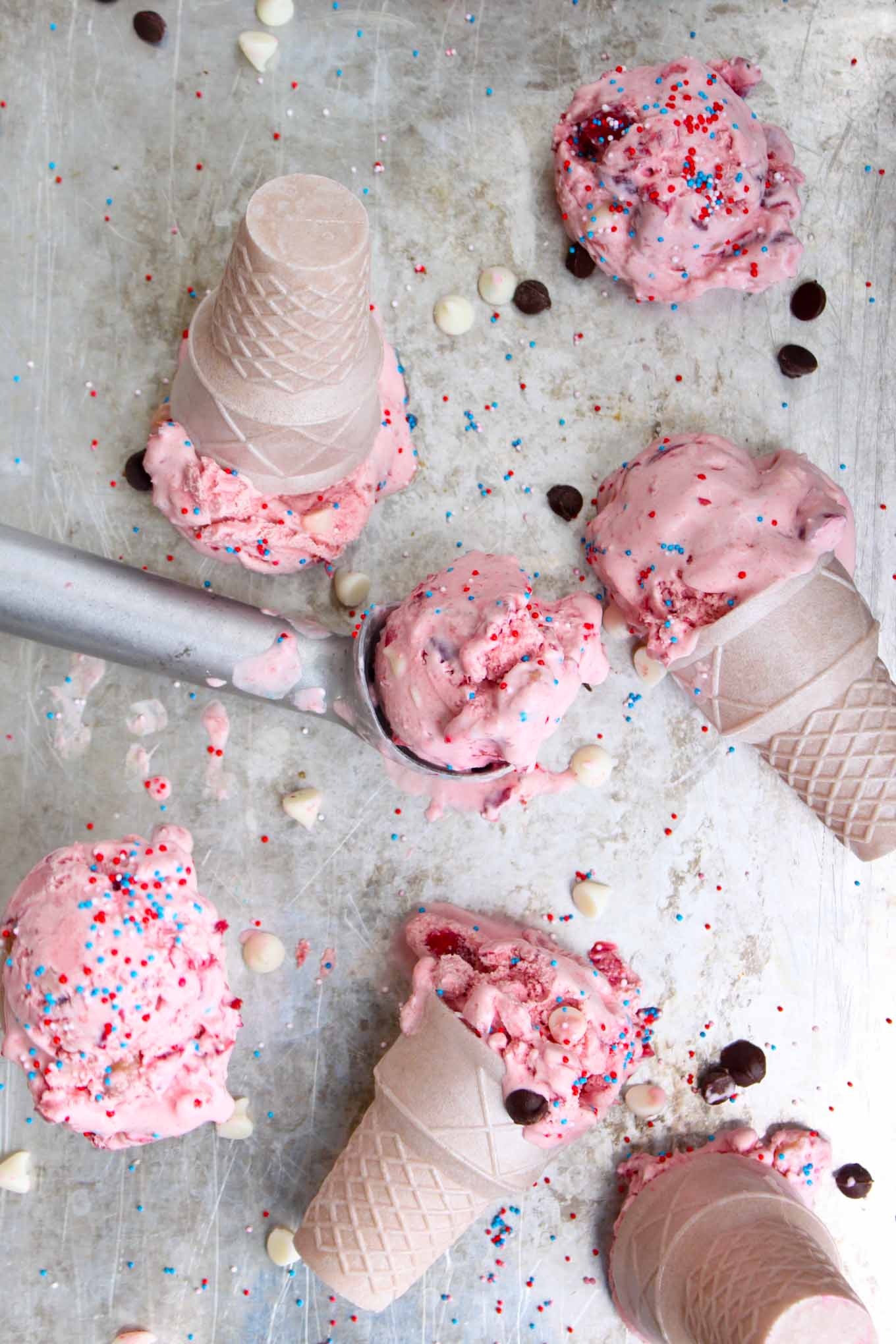 Our difference in athletic ability has never really been an issue in the past. I mean we both love to be active, I just like to do it differently than he.

That is until we had children.

So this summer was the first time every that any of our children have taken to anything athletic and the reality of who they represent comes forth.

My husband has ignored this until recently.

Our oldest has now decided that she loves sports and wants to do everything she can. So we take her word and sign her up for the local recreation soccer and blastball. Which is the first stage of t-ball and like super introductory, low-pressure, learn the basics and have a good time kind of sporting events. 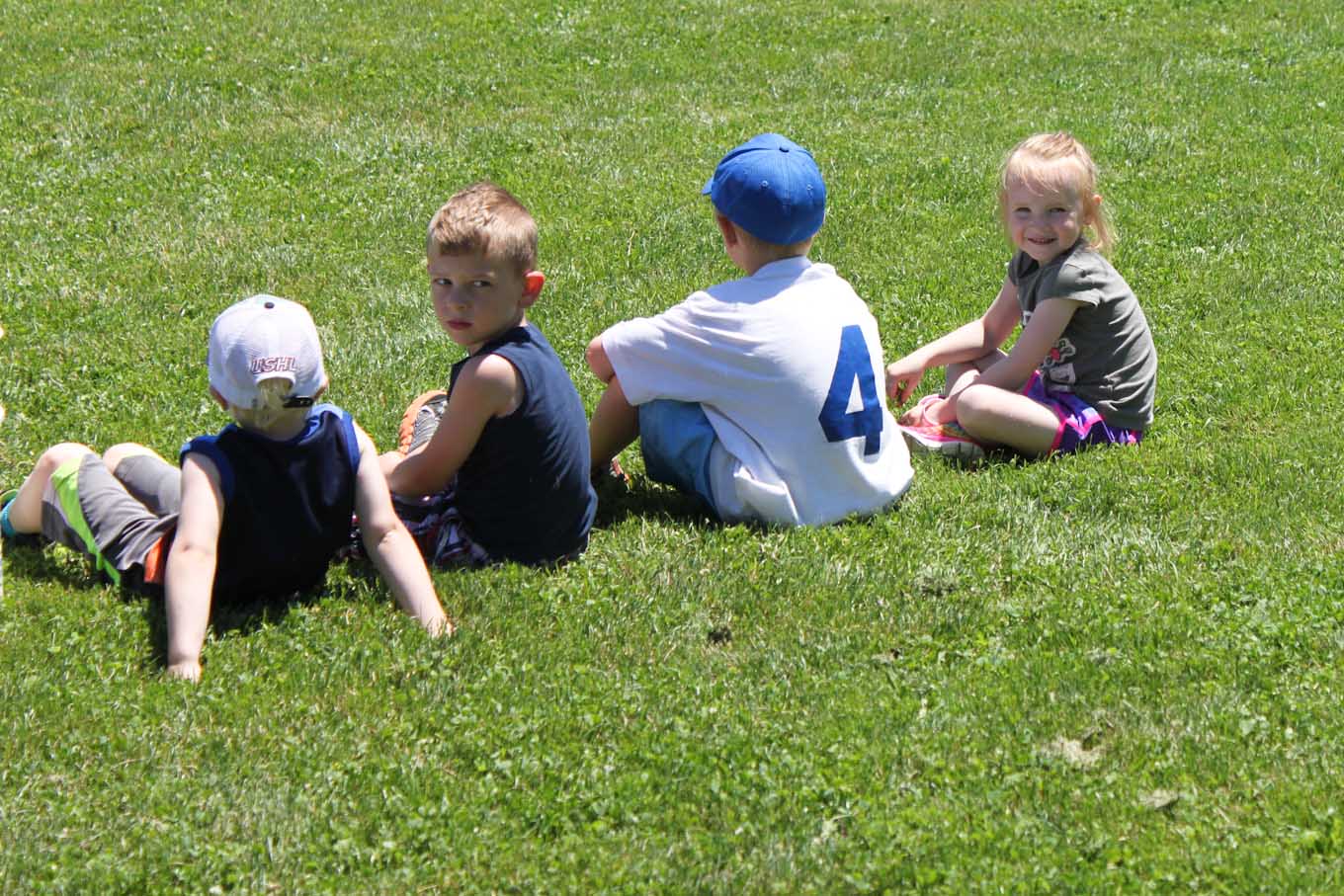 Blastball rolls around and I begin taking her to her practice or whatever you call them and watch in the stands with the other littles as our oldest has her big debut.

Running to warm up – she has this.

Stretching and talking with her friends – awesome.

Playing catch – not so much. 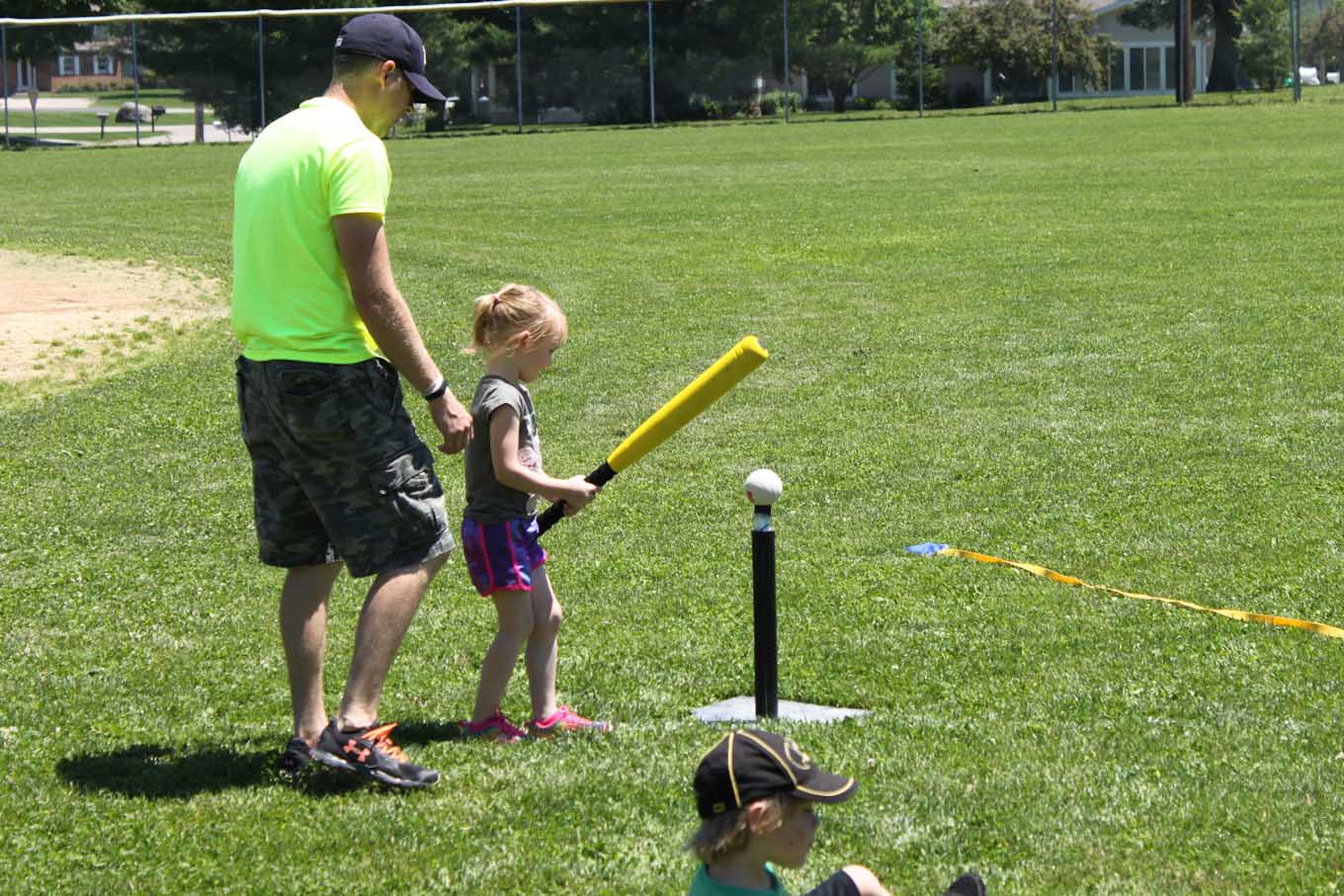 [Because right handed hitting wasn’t go so well, they moved her to a leftie] 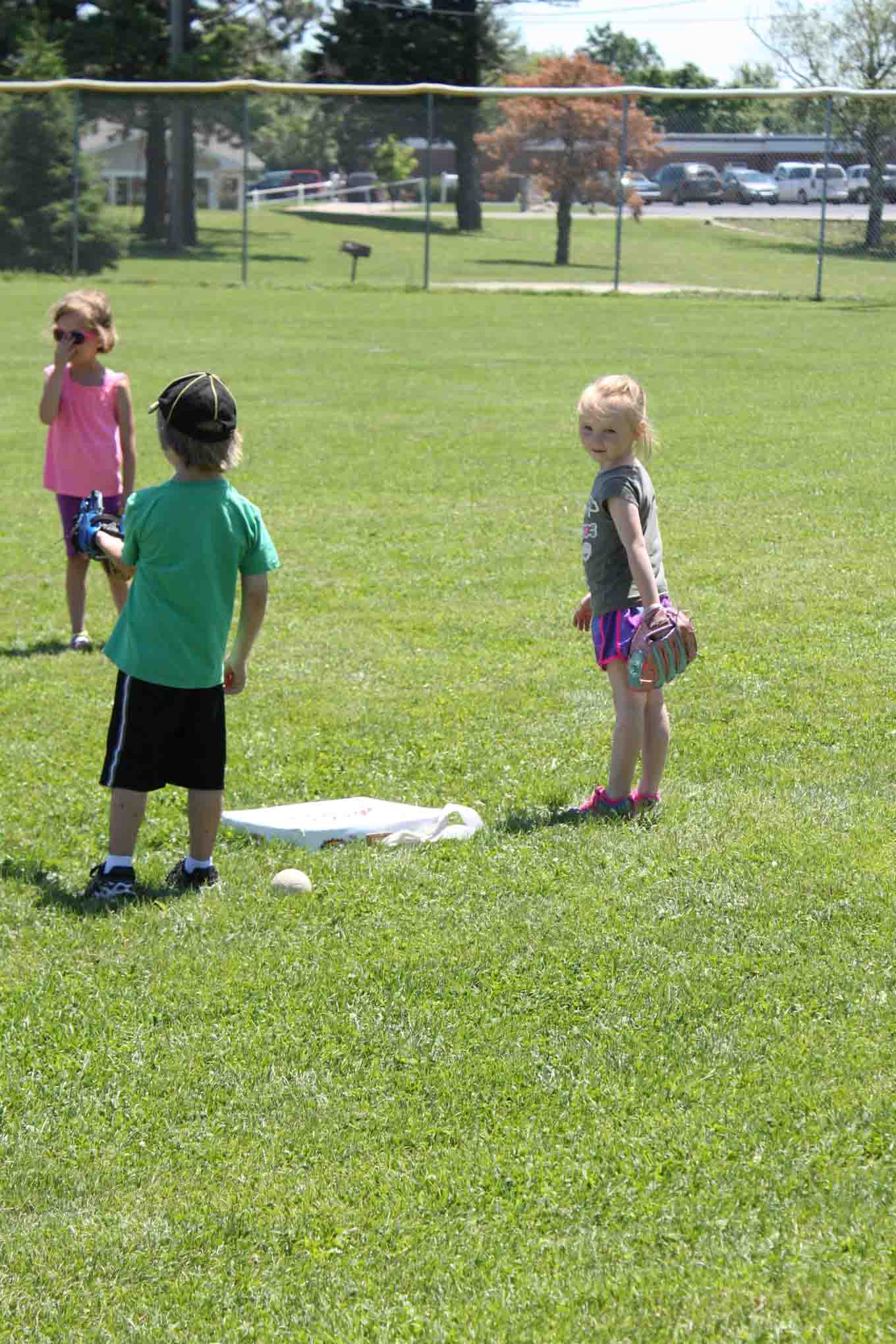 [Looking everywhere but at the ball]

You see when the girl gets into the fundamentals well its much more fun to socialize with her friends, pick grass in the outfield and run around in circles than it is to catch a ball or bat.

Much to her dads dismay. 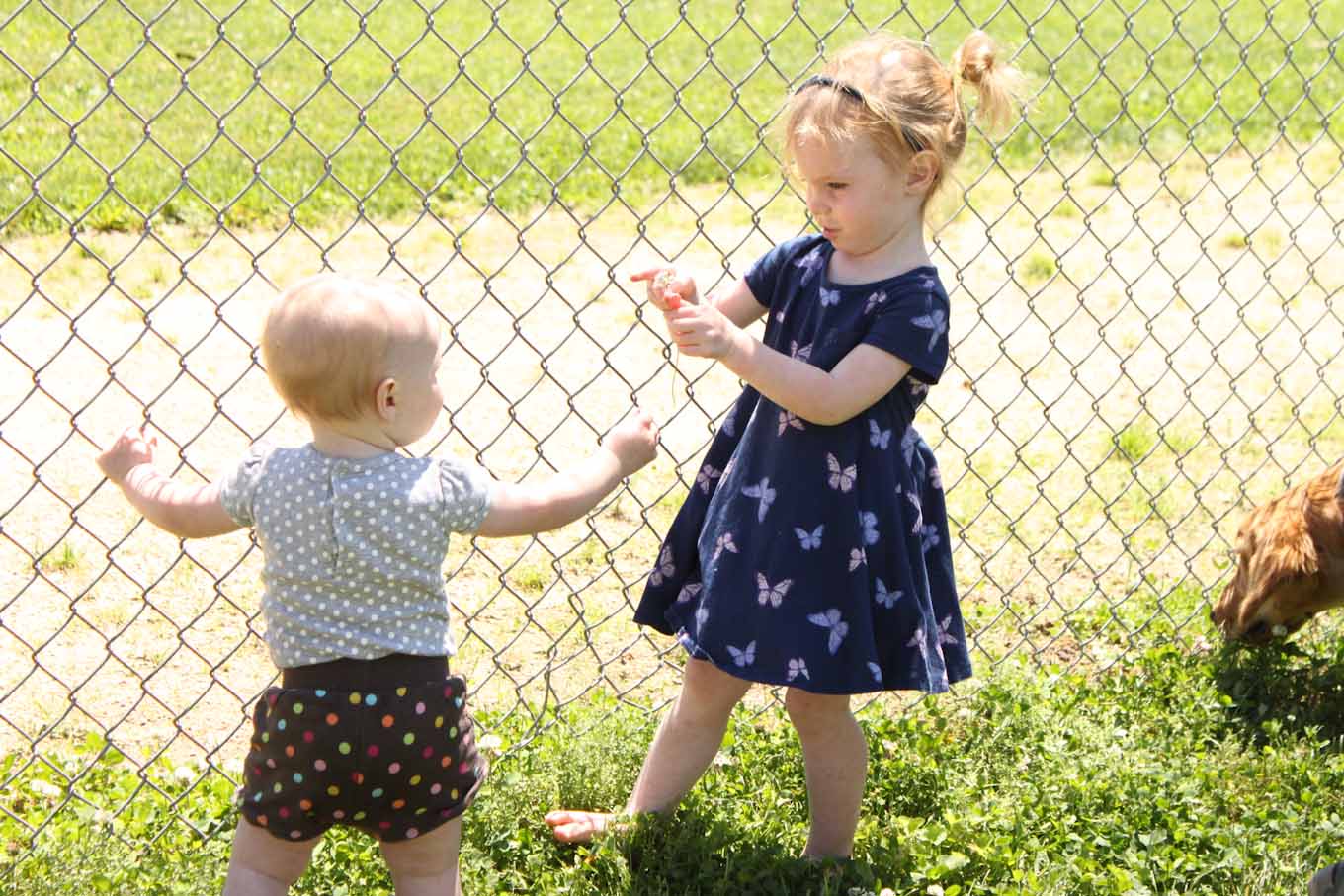 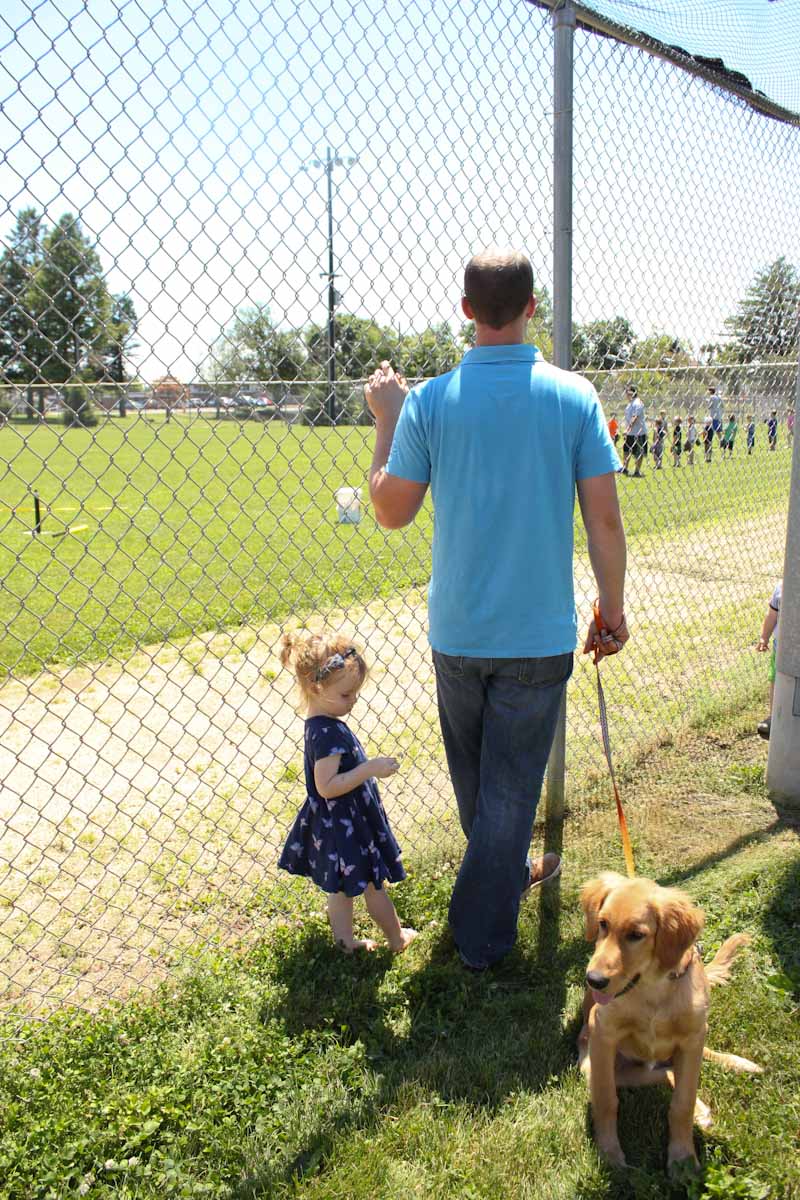 [Concerned she is having more fun talking than playing the game]

While she had numerous practices before the hubs was able to come watch, numerous attempts to swing a bat like a bat and not like a golf-club, catch a ball and get really into the game she didn’t manage to get there.

With the hubs showing up for her final blast ball practice excited to see his little star in action. We started out sitting in the stands, which turned to him getting nervous as he watched her walking and talking to her friends during warm-ups when she was supposed to be running. I believe he said, “Why is she walking? What is she doing?”

I just chuckled under my breath and thought that’s my girl.

Then it proceeded to him standing.

Which turned into him walking over to the fence as she was supposed to be playing catch but again was still talking to her friends missing the fact that the ball was being thrown to her each and every time. 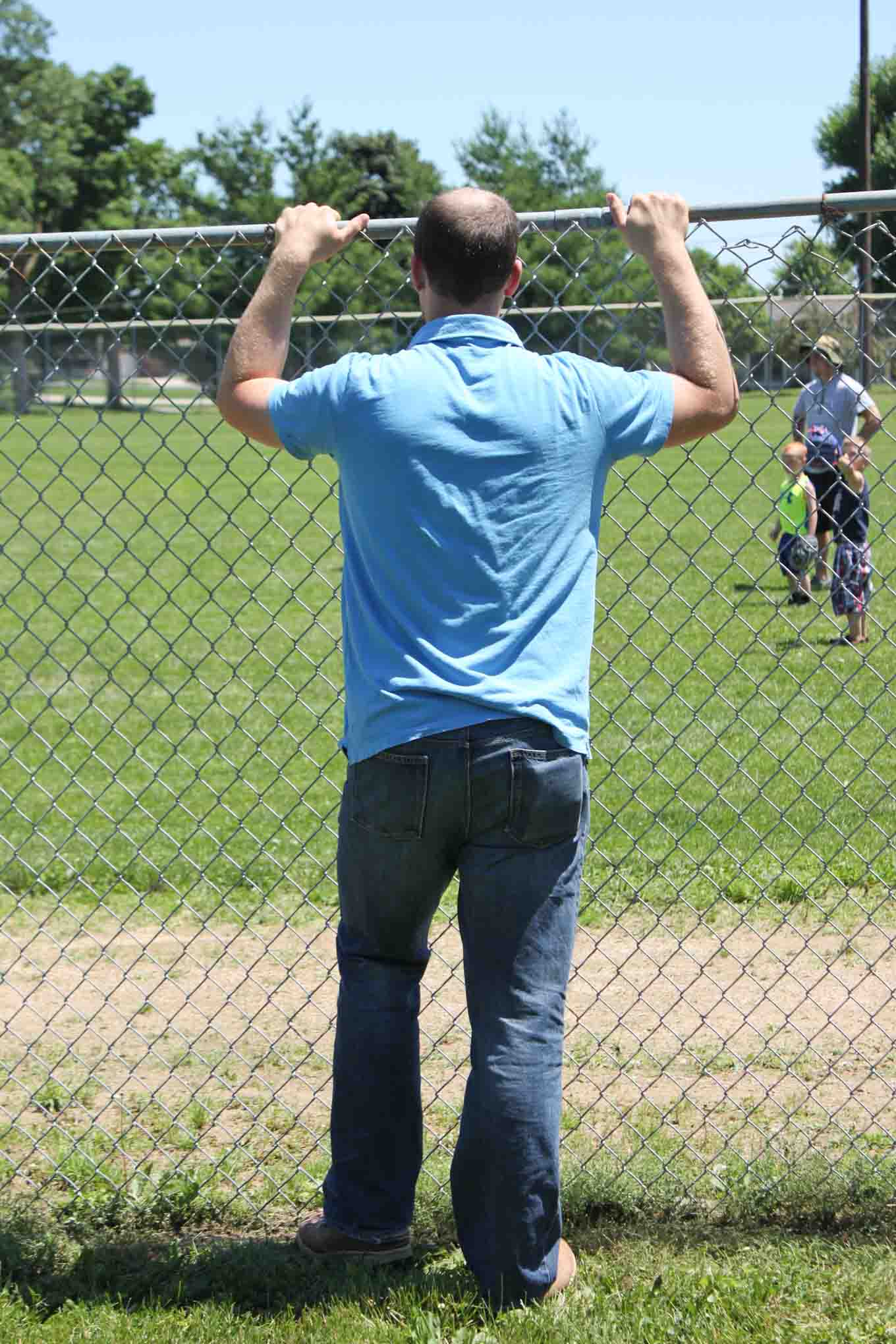 I heard him yell, “Ava just catch the ball, focus on the task.”

This is all coming from probably the most laid back dad ever who really gets worked up about nothing.

My heart is smiling to the fact that this girl thing is going to give him a run for his money.

I mean you can check it out from the series of pictures to why my husband is losing his hair. 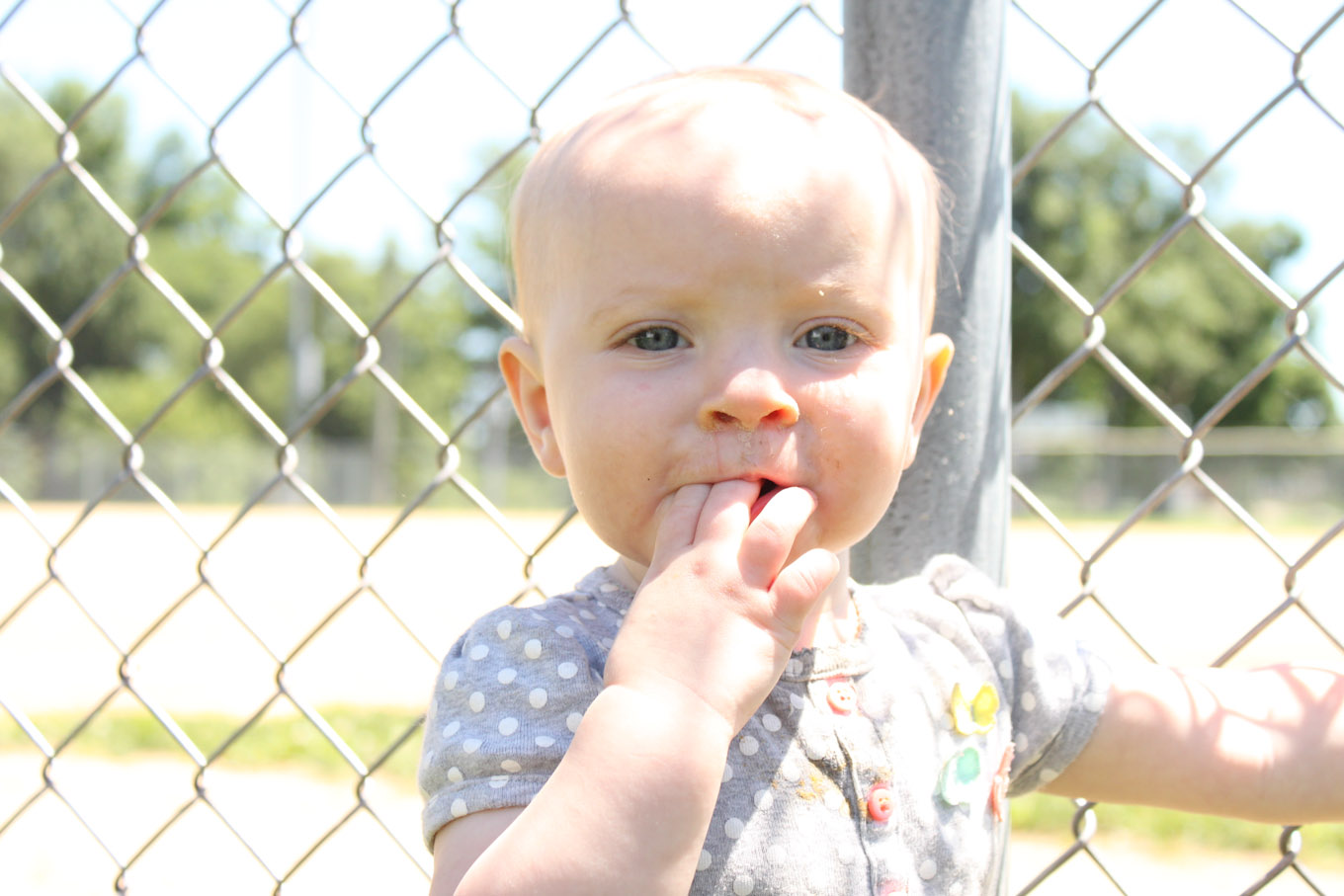 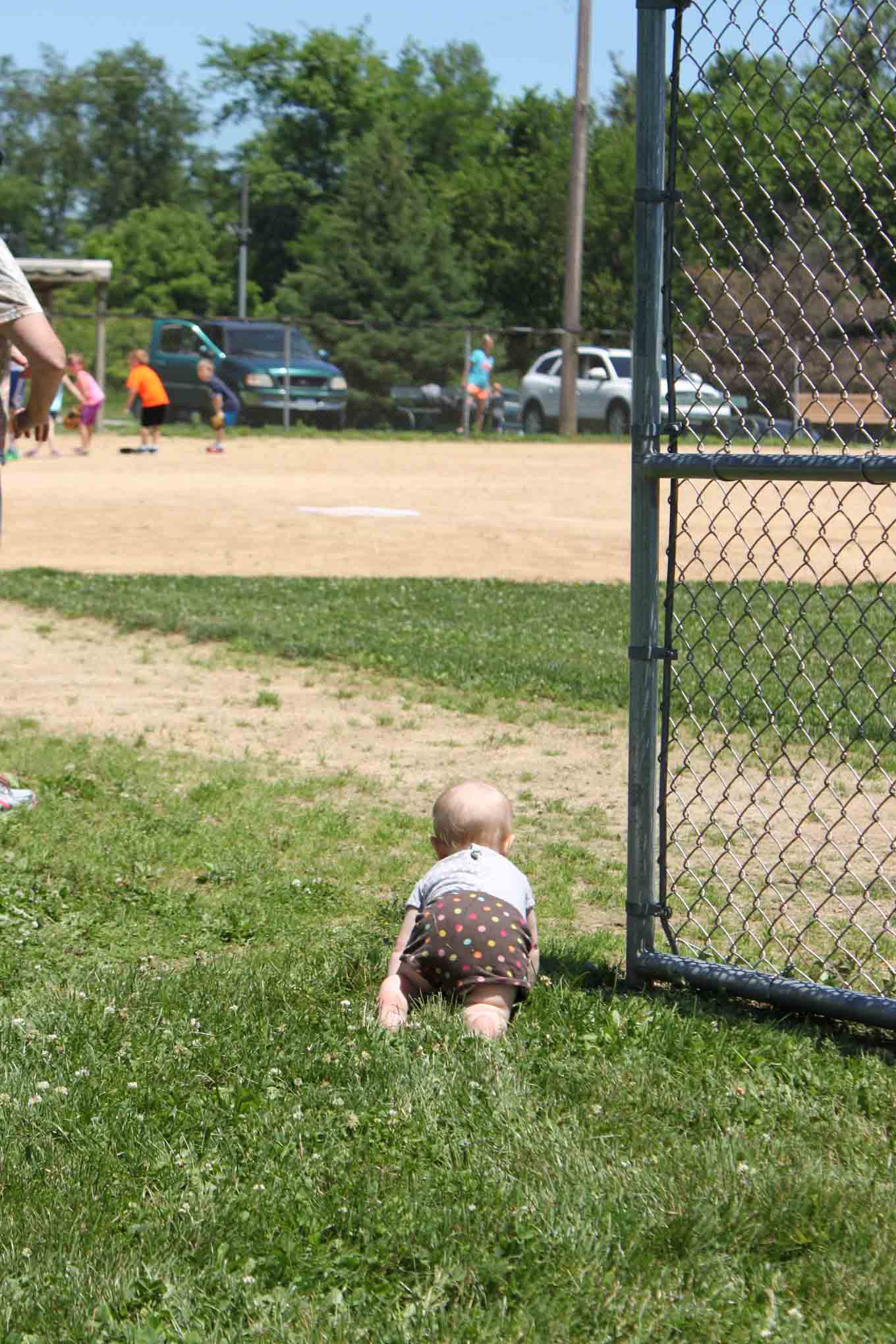 [The littlest trying to take matters into her own hands]

The practice continues with him reminding her of the task at hand. You can see by her face that she doesn’t really care, she is just there to socialize. Things end, he pats her on the back and we tell her how awesome she did. I mean the girl is skilled in the social department and we go home later to find dad out playing catch (for the first time I remind you) in the back yard with his girls.

Unfortunately for him, it didn’t last long and soon enough they were on to something else.

Our reality is, while he was a super athlete he may  be blessed with three very different girls with different motives than his own. They may be more into socializing than athletics and that is going to be perfectly fine. 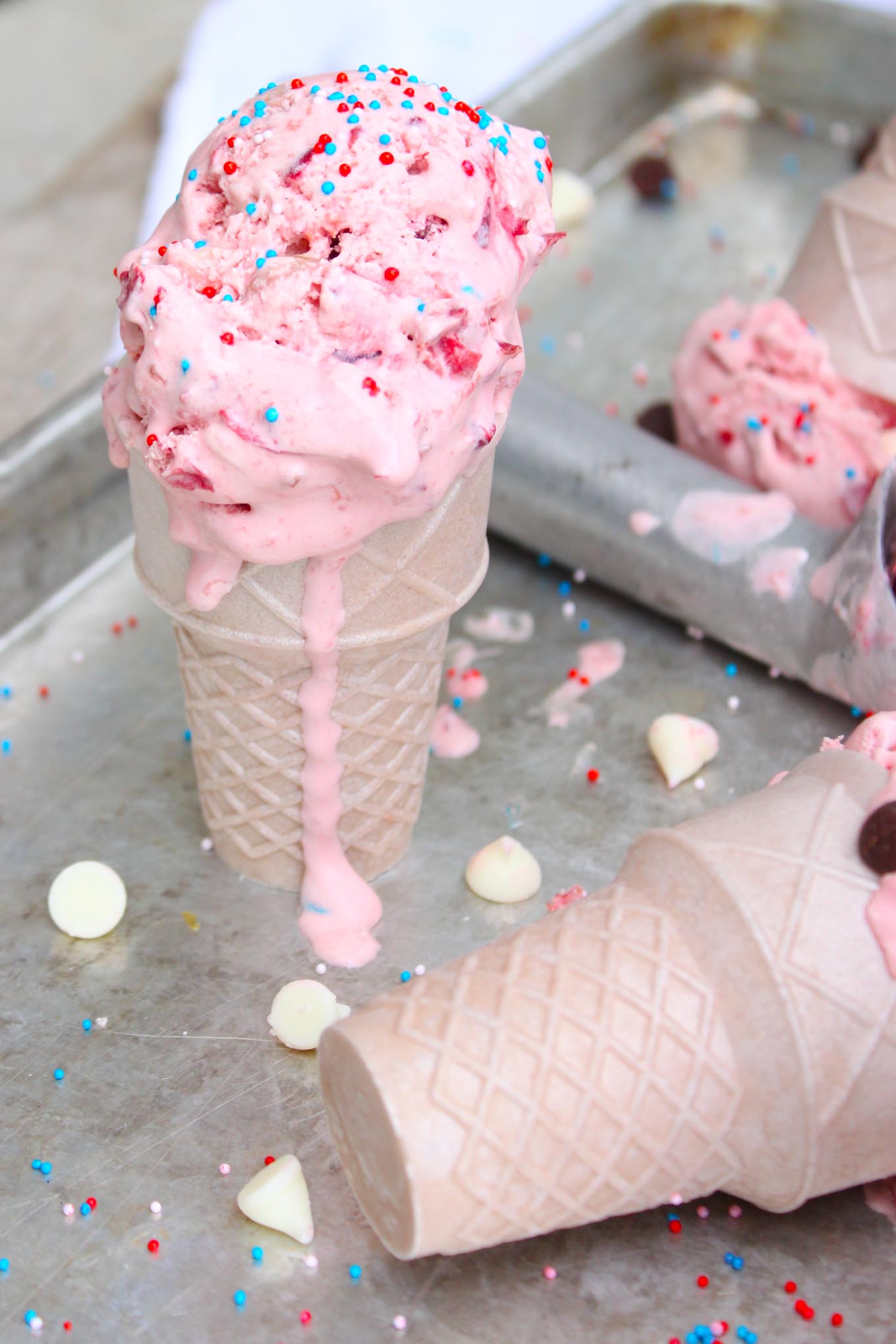 In the end, it was a good memory for me, a stressful one for dad and a fun time socializing for our daughter.

That is why I whipped out the big guns on this one. Complete with none-other than sparklers. I mean go big or go home right? That and the fact that I may never have seen my husband more stressed than that beautiful day at the ball park.

So we ended it all with this tart cherry ice cream with white chocolate and macadamia nuts complete with red, white and blue sprinkles and a (gluten-free) cone. Because mom splurged more for the sake of dad than anyone…

The tart cherries in the creamy, homemade ice cream with chunks of white chocolate and macadamia nuts may be my favorite treat all summer. And this is coming from the family member who isn’t keen on ice cream. Seriously though chunky ice cream is a win in my book and this combination just seals the deal! 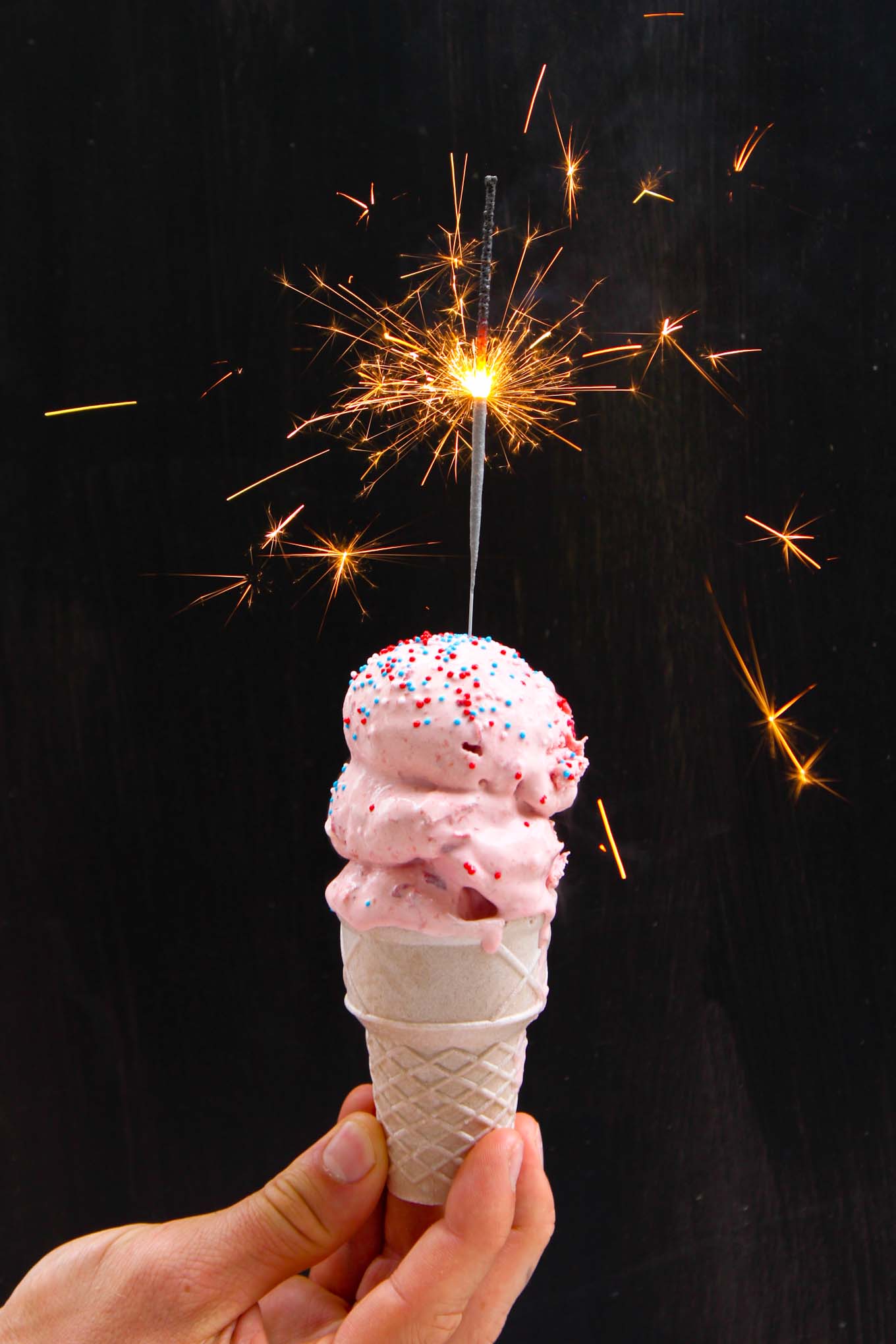