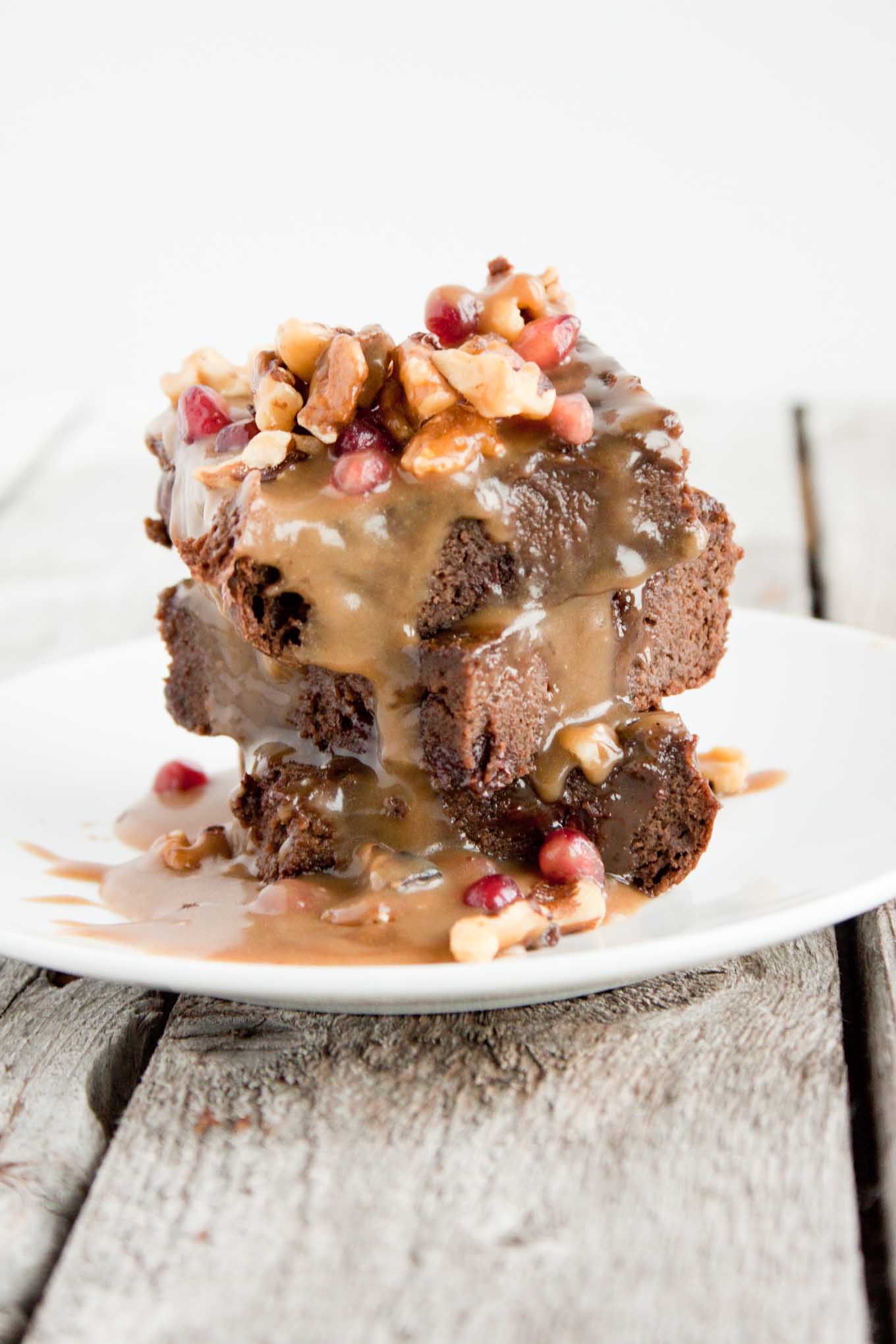 It’s love week and nothing screams love more than double fudge flourless caramel brownies. I know we are all swimming in chocolate this time of year but I just had to add a healthy chocolate recipe to the mix. I know your probably not complaining about the chocolate thing but healthy, really? It’s V-day. I know, I know but a healthy chocolate recipe is better than no recipe, right? I’m just trying to prevent you from plummeting from the sugar high. You can thank me later especially after you try this drool worthy recipe.  No one will even know that these extra fudgy, chewy, brownies with swirled caramel baked in and drizzled on top were;

Yep pretty amazing I know! So the secret, well it really is no secret anymore but beans. Black beans make up the bulk of this recipe creating the chewy structure. While I know that beans are not technically paleo (which is debatable), there is an actual health reason behind beans. Beans contain resistant starch as well as other compounds that actually help our good bacteria in our gut to grow and thrive. While they do contain lectins and phytic acid which have been shown to have a detrimental effect in animals, much research has shown that these compounds in legumes are actual broken down in the body and serve a number of healthful purposes (1). 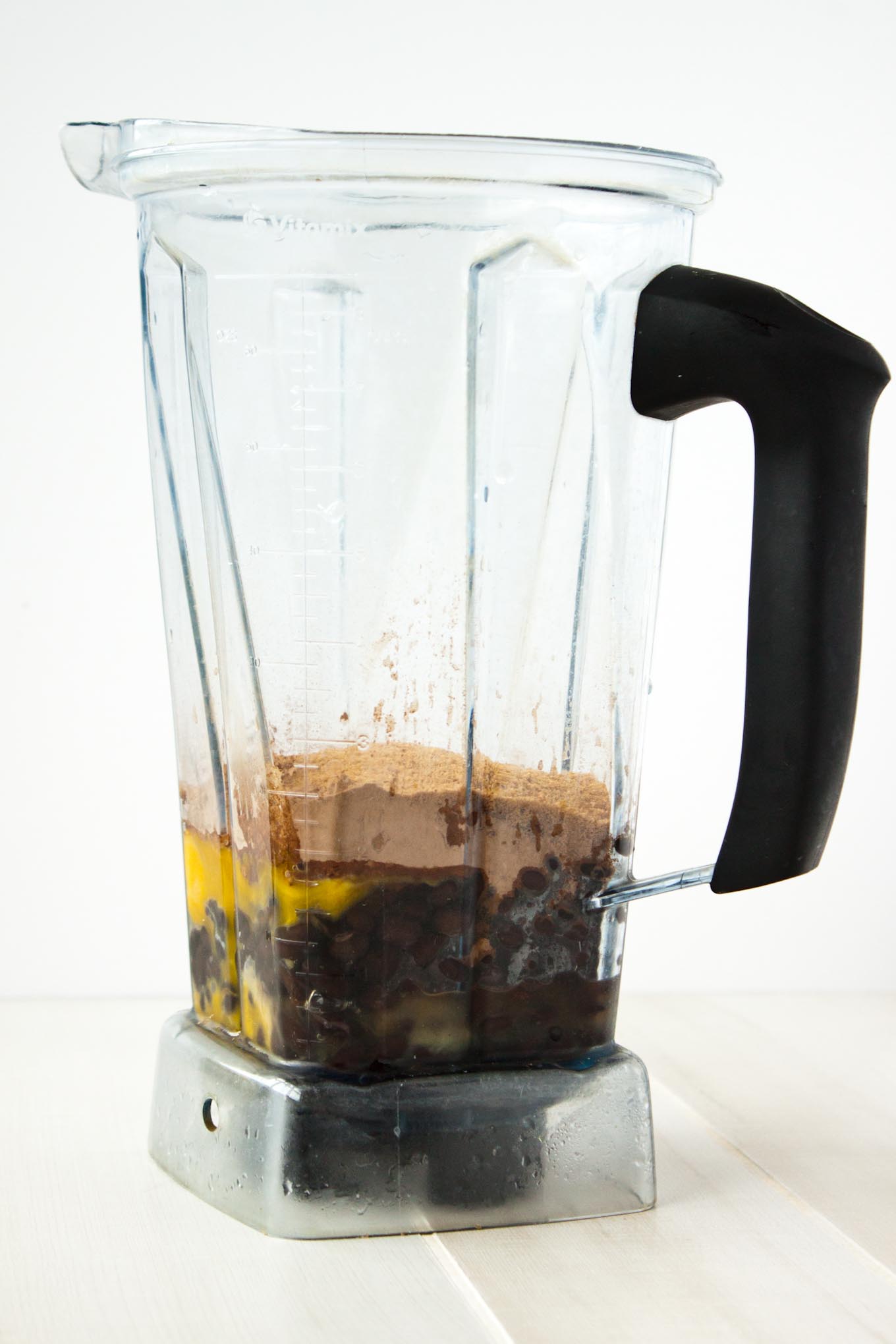 Now I wouldn’t recommend legumes on a daily basis, due to the lack of true nutrients they contain, I don’t necessarily think it is something to avoid at all costs. They still have a purpose, still a benefit in small doses and are better than the alternative such as the flour and sugar which would normally make brownies. Seriously, flourless, chewy, double fudge, low sugar brownies. It happened, with beans and it is so delicious.

While I’m sure I sparked much debate about the issue of beans,  I do need to talk with you about a lighter moment that happened with these brownies. I mean the hubs is still fuming about the issue, but seriously it is pretty funny. So the girls and I decided to bake these special brownies for the hubs to surprise him when he gets home from work (and trust me it would be a surprise because we never have dessert like this around).  I had called him earlier in the day to make sure he would be home on time so I could take a few quick pictures before they got devoured. I didn’t tell him what exactly I needed to take pictures of and apparently he just assumed it was another salad. ->HUSBAND OF A HEALTH NUT PROBLEMS<- 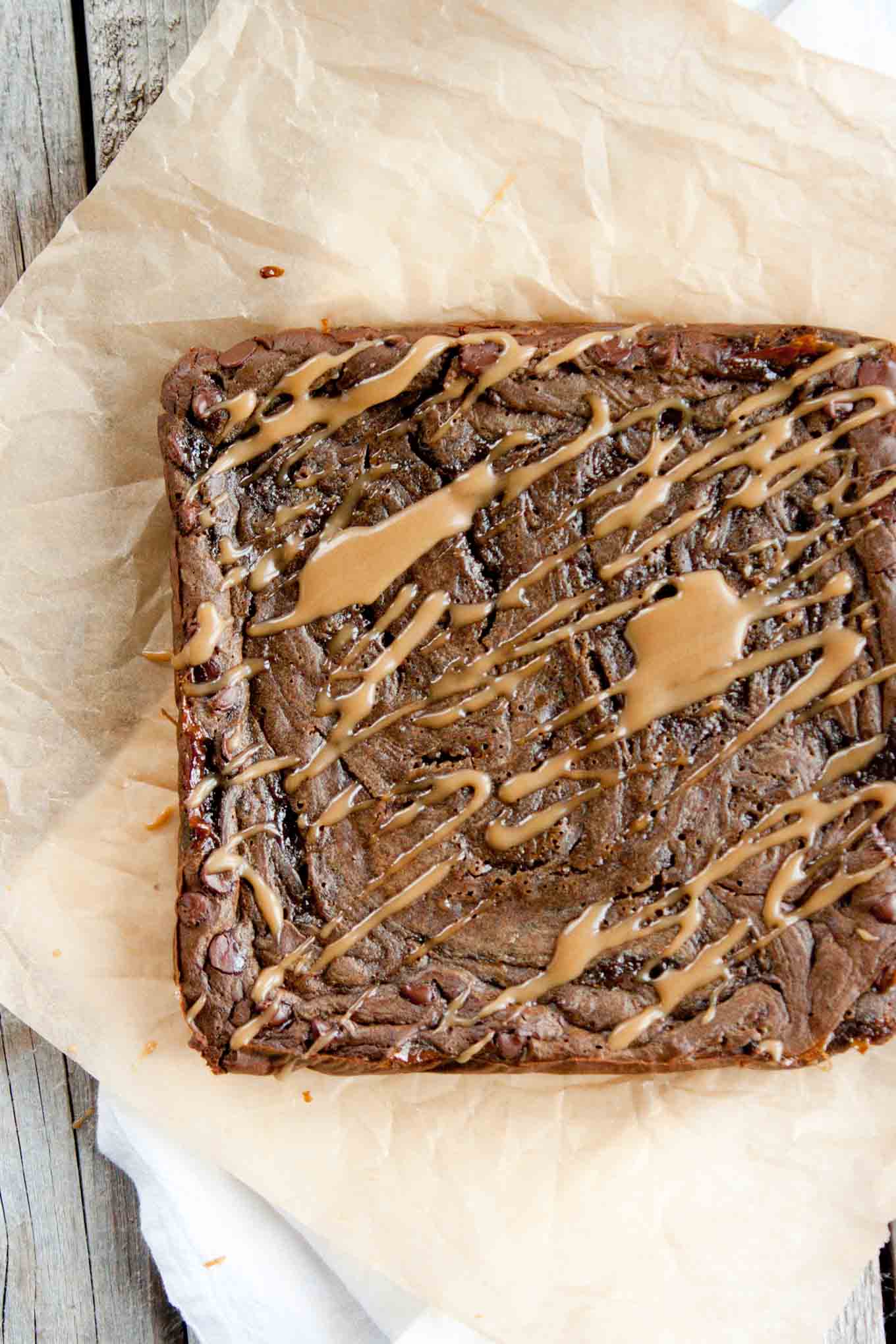 You can bet he was elated to come home to this triple decker double fudge brownie dripping with caramel sauce. Yep, that baby was hand created by his wee ones at home and full of love. The problem was after I finished photographing these beauts, while everyone else was in the garage (because that is where I make them go to keep them their little hands out of pictures), I went to get them so we could eat them. While I was calling for them, my parents dog got in and ate them off the photo board before I even knew it was happening. Yep, he downed the triple decker extra-special fudgy brownie in about 2 seconds. Before I could even muster a yell it was gone, just like that, gone.

How do you tell that one to the husband who was beyond excited that we had made him this very special treat, that wasn’t even another salad instead of brownie? Well it didn’t go well. I believe his frustrated muttering was something like this, “NO! He didn’t, really, for some reason I don’t believe you. No, are you kidding me….” This continued for about five minutes or so until it had time to really set in and the hope of eating this was crushed right before his eyes. 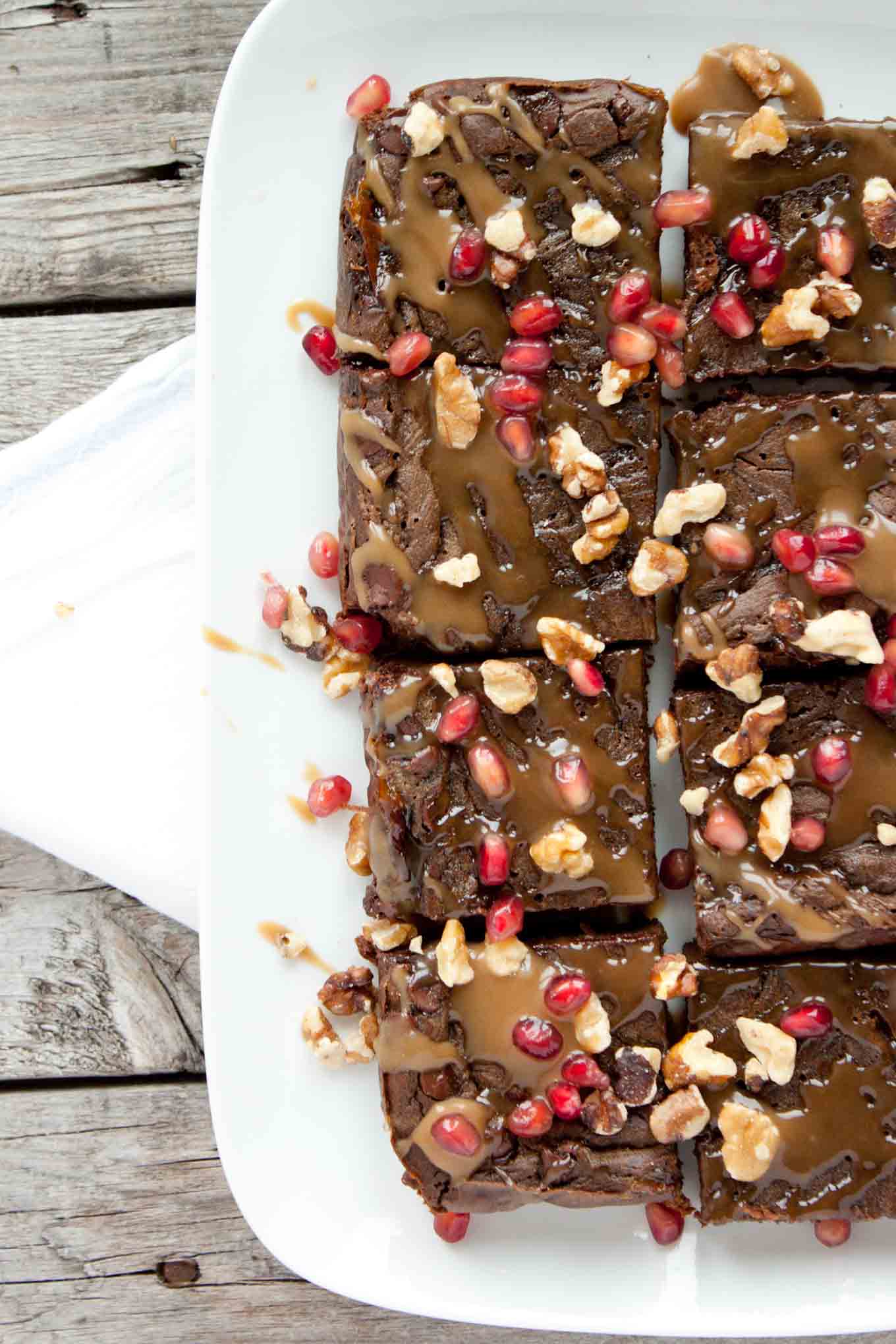 What was left on the plate was a half eaten, slobbered all over brownie. There were no takers on that and so we’ll take word from the dog that these brownies are delicious. That lucky dog licked his lips for the half and hour after he woofed it down. I’m pretty certain it was so good that he was just trying to get every last taste off his lips. And so that is the story of the brownies. I’m thinking I will need to make them again on V-day just to show him how much I do love him. This time, no dogs allowed because I think the stress of the pup getting it again would be a little too much to handle.

And yes I do realize that dogs shouldn’t eat chocolate, especially double fudge. I am happy to inform you he survived the incident and is quite satisfied about it. Now it’s your turn, surprise your special someone with this drool worthy, and easy treat for V-day. You won’t regret it and your dog won’t either…

And can I call a truce with beans and declare us friends? It will make eating these fudgy delights so much more enjoyable. 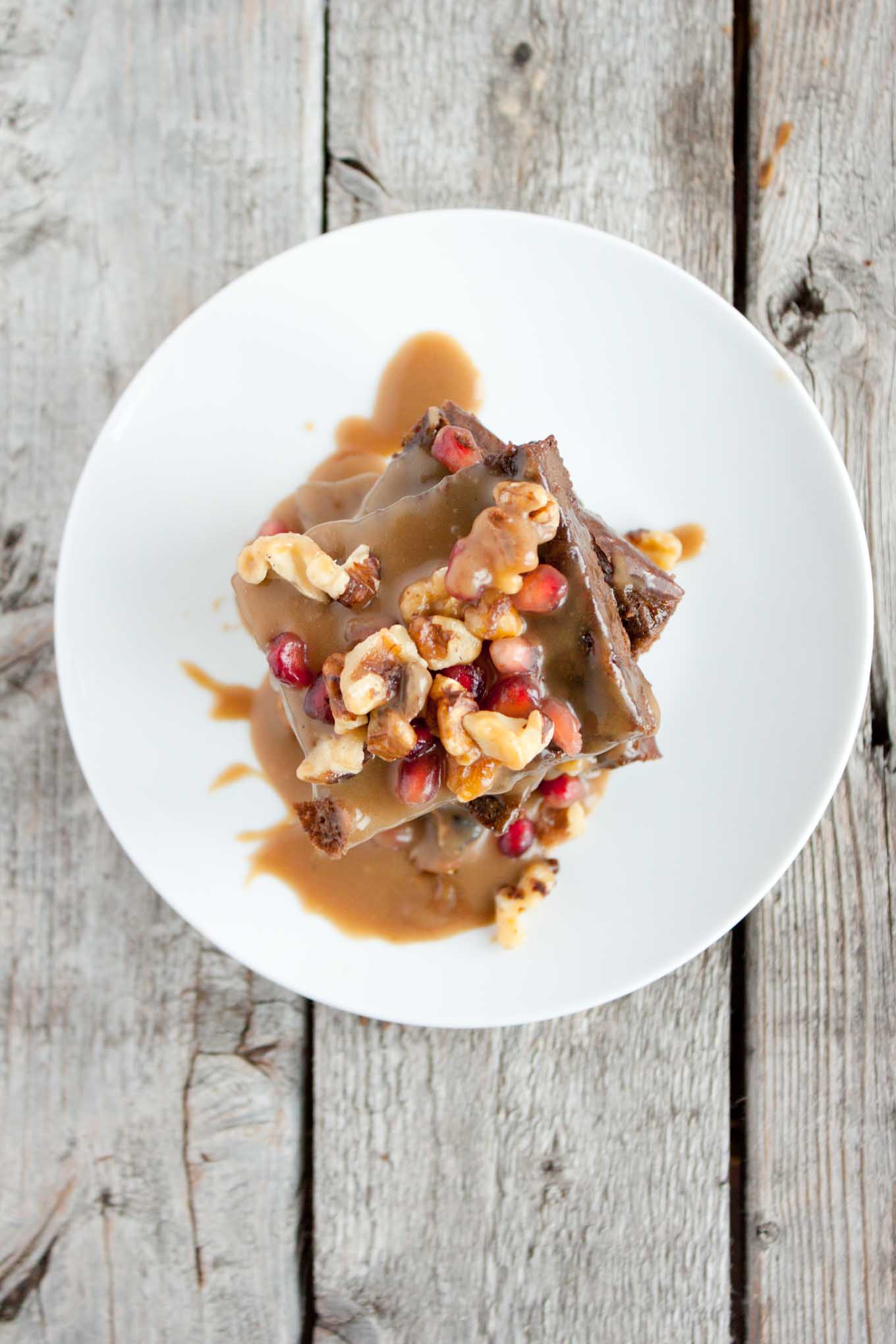